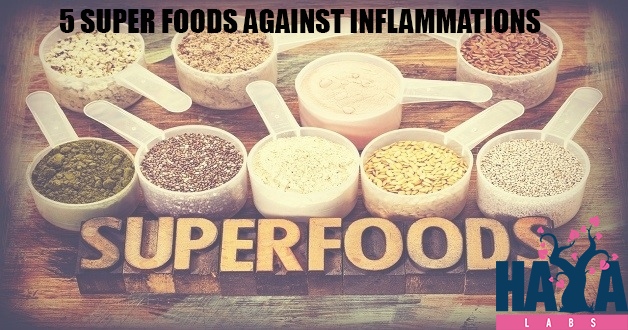 
When the human body is exposed to outside attacks and struggles with inflammation processes, the organism becomes vulnerable and has to be protected. Many foods possess anti-inflammatory properties which may relieve some symptoms and help the organism recover faster. Here are some super foods that offer a natural support against harmful agents:

Cinnamon is one of the oldest herbs used all over the world for many centuries. The scientific studies point out that this spice is capable not only of stopping inflammation but it also neutralizes harmful bacteria, it brings relief to the pain that comes with arthritis and it improves the brain function. Cinnamon is a source of dietary fibers, manganese, iron and calcium and has the ability to reduce the levels of bad cholesterol in the body. Cinnamon is a great addition to all diet plans that aim to reduce the body weight.

This spicy root is available throughout the whole year and is becoming a more and more popular addition to various dishes, teas and salads. Ginger contains a few anti-inflammatory compounds called gingerols which can help reduce joint pain, provide antioxidative protection, decrease the risk of getting colon cancer, and stimulate the immune system. This plant is a natural remedy against vomiting and is commonly used in cases of morning sickness in pregnant women.

Walnuts are among the nuts that have the most numerous benefits to the health. They contain a large amount of omega-3 essential fatty acids which decrease the inflammation processes and provide a valuable support for the health of the heart.
read more
» Super foods – the great marketing deception

Walnuts contain more antioxidative substances than peanuts, almonds, cashew, hazelnuts, macadamia and pistachio. They are a rich source of protein and fiber and the best thing about them is that they may be added to all kinds of dishes.

This spice is typical for Asia regions and has a specific yellow color which is due to a substance called curcumin. Curcumin is a natural antibiotic which relieves chronic pain and suppresses the inflammatory processes in the body. The root contains essential vitamins and minerals among which are calcium, iron, phosphorus, iodine, and the vitamins С, B1, В2, ВЗ. Turmeric increases the activity of the intestinal flora and improves the digestion.